Twenty-six years ago, on February 18th 1989, I walked into a banquet hall at the Omni Shoreham Hotel in Washington, DC to pick up my registration packet for Presidential Classroom. As I entered that room I noticed a pack of boys standing off to the side of the room wearing military school uniforms. I took note of the one who appeared to be the leader of the pack. I’ve always had a thing for the leader of the pack. The pack-leader’s black flat-top haircut and ridiculous number of cords and medals made him look like some hybrid of Play from Kid N Play and a Mexican general. 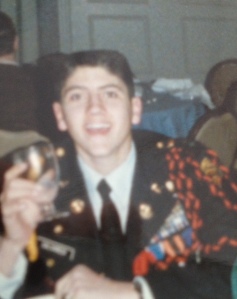 I was a seventeen-year-old senior in high school and evidently that hybrid was my dream guy. Five years later, on February 18, 1994, we were married.

On our 18th anniversary I shared “18 things we’d learned in 18 years” of marriage. Unfortunately, life lessons for us tend to be learned the hard way. Our hope is that by sharing what we’ve learned through blood, sweat, and tears, some other couple will just take our word for it and avoid the process of painful learning.

This year, as we celebrated our 21st anniversary, we sat and discussed what we’ve learned since the “18” list was made. In the last three years we’ve actually learned more about life, God, what we’re made of, and how to love, than we learned in the previous eighteen years. After a lengthy discussion, we narrowed those lessons down to three new bits of wisdom that we hope inspire you…

1. Treat your spouse better than anyone else treats them. We all want to be around people who build us up. If the person who does that for your spouse is someone other than you, guess who your spouse is going to want to spend time with.

2. When you fight, don’t vent to your friends and family. They’re not in love with your spouse and long after you’ve kissed and made up they are going to remember the dirt you’ve shared with them.

3. Have friends who love their spouse. Nothing good will come from keeping company with a person who constantly complains about the person they chose to marry.

4. Trade the worst for the best (Dear hubby shared this one last night for the very first time. He’s a keeper. :)). When your spouse shows you the worst of their character, think about all of their best qualities. When you remember the things you like about a person it’s easy to forget the things you don’t.

5. Be the first to apologize.

6. Don’t go to bed angry. It is easier said than done, but it is a very worthy goal.

7. Spend time with couples who will speak truth. It may hurt your pride to be on a double-date and have someone ask you, “Are you treating him the way you want to be treated?”, but it will never hurt your marriage.

8. Avoid alone-time and personal conversations with anyone of the opposite sex (or the same sex if you find yourself craving more time and/or sharing more with that person than with your spouse).

10. Pay attention. I try to make mental notes of everything my husband says he is interested in. “I love this band.” (Get concert tickets) “I’d like to eat there some day.” (Make reservations for date night) “I’d trade a kid for one of those guns.” (Buy him a weapon for father’s day.) When you pay attention to what your spouse talks about, you will never run out of ways to show them you love them.

11. Have sex. Lots of sex. In premarital counseling, I had a little old lady look at me and say, “Kaci, sex is as necessary to a man as food. Just always think of it as a meal. Sometimes he’ll give you several courses of fine dining and sometimes it’ll be like going through the drive-thru at McDonald’s.” She was a very wise woman.

12. Give grace. The Bible tells us repeatedly to forgive others so that God can forgive us. We’ve learned that giving the same kind of grace that we hope to receive is our only hope for a peaceful home.

13. Confess. Confess. Confess. When you hide things it’s an absolute certainty that the enemy will start asking you, “What is she/he hiding from you?” Secrets and half-truths lead to guilt, distrust, accusations, and insecurity. If you feel the need to keep something from your spouse, share it with your spouse immediately. Wine and cheese get better with age. Not sin.

14. Don’t let the kids come between you. Believe me. They will try. And try. And try. When your kids can turn you against each other it makes them insecure and it damages your marriage. Remind yourself often that when two people have a child, they have a common enemy.

15. Remember that your spouse IS NOT your enemy. It is very easy to assume that every pain they cause you is intentional. It usually is not. Go back to number 12.

16. Date. We just started dating regularly about six months ago. We don’t know what took us so long, but date-night is now our favorite night of the week.

18. Pray for each other. Out loud. We went on a marriage retreat in the summer of 2003 where we were told to find a spot in a room full of people where we could pray for each other. We were both scared. Quite certain that we were the only couple in the room who had never prayed together, we held hands, closed our eyes, pressed our heads together and listened for a few minutes to the people around us to see if they knew how this was supposed to work. Realizing that nobody around us sounded any more comfortable than we felt, we started praying. In that half an hour we took turns thanking God for all the things we love about each other and claiming His blessings over each other. When we were done we looked at each other and discussed the fact that neither of us had ever felt so loved or so secure in our relationship.

19. (This should really be #1) Figure out what it means to be in relationship with Christ and work on that relationship BEFORE you deal with issues with your spouse. If you don’t have God in the proper place in your life you WILL expect your spouse to be your savior or to fulfill needs that they will never be capable of fulfilling.

20. The Do-Over… This is probably the most valuable communication tool we’ve discovered. A couple of months ago I said something to my hubby in an unintentional nasty tone. He looked at me and said, “Would you like to do that over?” Since that moment, every time one of us feels hurt or offended by something the other one has said or done, we offer a do-over. See numbers 15 and 12.

21. Laugh. A lot. Maybe even more than you have sex. Here’s the biggest thing you should know about married life: It’s hard. REALLY hard. If you let it, the hard stuff will destroy your marriage. No matter what you’re going through, look for something to laugh about. I’ve known several couples who stopped having sex and stayed married, but few who stayed together when they stopped laughing together.

In honor of surviving the last twenty-one years we ventured out in single digit temperatures to see Tab Benoit in concert. Sitting in a concert hall listening to the Blues with the love of your life may not be a necessity, but it certainly doesn’t hurt. 😀