For the last week we’ve made nightly pilgrimages to the beach to watch the sunset. Every sunset outdoes the one before and every evening I’m reminded how good this place is for my soul. It’s good for my baby girl’s soul too. After needing someone to hold her hands for months, I’m in awe every time I watch her jump out of the car at the beach and run in the water completely independent. The water and sun are quite literally healing her. 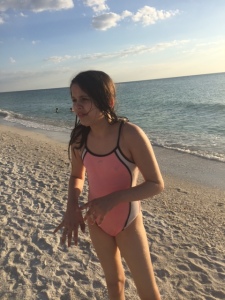 Two nights ago I snapped this picture of her free hands and then followed her gaze to two little girls who appeared to be about four and six years old sprinting down the beach. Just as I looked at them, the older girl stopped dead in her tracks and asked, “Where are the adults?” She then clenched her fists and yelled, “WE NEED AN ADULT!” That little girl is my soul sister.

Throughout this election season I keep looking around and asking myself, “Where are the adults?” I’ve watched the candidates talk about each other like the kids my Mom told me to stay away from in elementary and middle school. I’ve watched people on social media sever relationships with friends and family over which candidate they support. Every single time I see someone post, “If you’re voting for ____, please unfriend me now”, all I can think of is the mean little five year old girl that lived behind us when my daughter was in kindergarten. She made my daughter cry repeatedly by telling her things like, “I can’t play with you because I don’t like your dress.” or “I can’t be your friend because your hair isn’t long.”

I’ll make this easy for my friends and family. I don’t care who you’re voting for, or even if you cheered for Alabama last weekend. I still love you. And I always will.

For all of you that are completely impassioned over your chosen candidate, I respect you for being so certain of what you believe in. I’m just not there.

For everyone who’s freaking out over this election (like me), I have some comfort to offer you…

Without googling or phoning a friend, answer these two questions:

Do you know the answers off the top of your head? If you do, you’re probably smarter than 99.9% of Americans. If you don’t know, it’s okay. I had to do a little research to find the answers myself.

In 1916, Woodrow Wilson (a Democrat) was elected to his second term as President. It is indisputable that he was a racist and a misogynist. Throughout his first term women suffragists were thrown in prison for protesting over the right to vote. During his second term, he made several public comments in support of women voting, but the 19th amendment didn’t actually pass until after his Presidency. Wilson did some good things. Wilson did some bad things. America survived.

My point is this… On Wednesday (by God’s grace) we will know who will be the 45th President of these United States. 45 will likely do some good things and some bad things and in 2116 the majority of Americans won’t have a clue who won this specific election. Only God knows if America will still be America in 2116. Speaking of… there is only one ABSOLUTE certainty…

Hebrews 13:8 Jesus Christ is the same yesterday, today, and FOREVER.

America is less than 250 years old. God is eternal.

After watching the little girl on the beach clench her fists and scream, “WE NEED AN ADULT!” I looked around and couldn’t see one anywhere in my line of sight. And then I realized, as much as I don’t feel like adulting most days, I am a bonifide grown-up. I have two children in college and two that rely on me to be their constant caretaker. I have buried my mother and grandparents and handled all the adult aftermath of their deaths. And I’ve voted in seven Presidential elections.

I’m pretty sure that if you’re reading this, you’re an adult too. Can you do me a favor? No matter who you’re voting for tomorrow, let’s show each other a little grown-up love and respect. I don’t care how long your hair is. I don’t care if you wear yoga pants and a hoodie every day of the year. Well actually, I respect you for that… even if that hoodie shows support for Alabama. I just know that the only certainty in this whole frickin’ universe is that God is still God and He always will be. And I’m pretty sure that when we stand before Him we will have to answer more for how we love and respect the people we have the privilege of knowing than we will for how we voted in 2016.