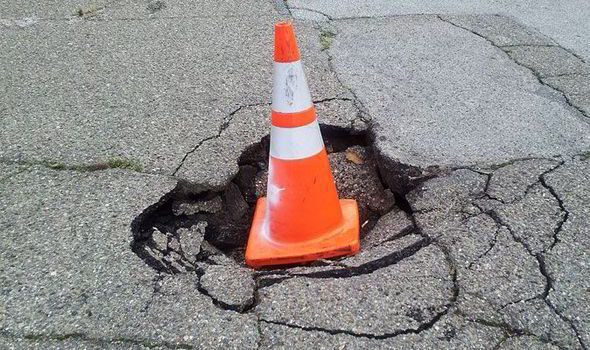 I’ve written before about alignment, but I can’t find the piece right now and it’s a day where I think we could all use a refresher.

I watched a man riding a unicycle last week. He was steady for a while and then the one wheel got wobbly and he had to jump off to keep from crashing. It’s really hard to balance and move forward on one wheel.

A couple of years ago I made the mistake of riding my bike down a hill on a freshly paved street. As I passed the sign that said, “Dismount bikes and walk them down hill”, my front wheel slid to the right and I crashed. When my wheels became out of alignment, it was impossible to balance and move forward. PSA: Wear a helmet! Mine saved my skull that day.

After our recent blizzard there are potholes EVERYWHERE. Potholes lead to misaligned tires on vehicles. My car is currently in desperate need of an alignment and I have to hold the steering wheel hard to the left in order to drive straight. But you know what? After I get my tires aligned it’s going to be easy-peasy to drive my car exactly where I want to go. Four wheels moving in sync and a tank full of gas are unstoppable.

You, me, we, are defined, seen, viewed, and respected (or not) by the ideologies, political parties, causes, and people that we choose to align ourselves with. And sometimes we align ourselves with some thing, some cause, some one; simply because we want to be a part of something that feels unstoppable. Our human nature leads us to add voice to a cause because we think our voice will add fuel or the needed victory wheel.

You know why only one person can ride a unicycle? Bingo! There’s only ONE wheel.

Hence the fact that few brave the unicycle.

A couple thousand years ago there were twelve men who braved their own unicycles. They walked away from the lynching, mob-mentality of their day and followed a man who they trusted to be the Son of God. You know why we know about them? Because God wants us to learn from them. We know what their professions were and we know some details about their families, but the most important thing we know about the disciples is that they aligned themselves with Jesus. Their choices, their actions, their words (for the most part – they were human after all) aligned with the character of Christ.

You see… when we call ourselves “Christians”, we have to be REALLY careful who and what we align ourselves with; what “fan bus” we jump on. We often have to choose between the gut-satisfying adrenaline rush we get from joining forces with something that feels unstoppable; and the scary hard stance of aligning ourselves with God’s Word and acting like Jesus.

A dear friend that is currently serving our country in the Air Force and working hard to be the best single-Mom on the planet lost her own Mom a few days ago to cancer. In two weeks she goes to court to fight for custody of her daughter. Because in the middle of watching her Mom lose her battle with cancer, her daughter’s step-mom decided that she REALLY wants to be a mom. There are people reading this who have aligned themselves in this battle to take a child from her mother.

Here’s the thing. I’m mothering a child who was separated from her biological mother. If you know me or have read anything I’ve written, you know that I LOVE adoption. I proudly align myself with the call to place orphans in families and I will spend the rest of my life addressing orphan-care at every given opportunity.

But adoption NEVER happens without loss. There are ALWAYS psychological and spiritual wounds incurred when a child is torn from the woman who gives birth to it. No exceptions. If a Mother is capable of caring for her child, then the very best place that child can be, is with the Mother.

In my daughter’s situation, there was no alternative. Her biological Mother was not capable of caring for her and now we get to do everything in our power to help heal her wounds. That is not the case with my friend. She is an excellent Mother, fully capable of caring for her child, and as she experiences her own tearing away from the woman who gave her life, she is facing the possibility of losing her child.

Because you should always be careful about what you allow to define you, I have a few questions you should ask yourself when choosing what/who to align yourself with:

What is the destination of the bus I’m jumping on?

Does the hoped for outcome align with God’s heart? Is the cause something Jesus would fight for?

Is the character of the person I’m aligning myself with beyond reproach? Am I okay with my own character being defined by standing up for this person’s character?

Will the thing or person or cause I want to align with make me more like Jesus and help define who God created me to be?

If the answer to ANY of those questions is “No” you’ve just hit a pothole and it’s time for a realignment.

I stand with my friend because I believe the very best orphan care we can provide is to ensure that a child is never taken from her Mother to begin with.