From the beginning of our journey, we thought that our daughter’s name was Ana-Sophia.  Ana means gracious and Sophia means wisdom.  I have written before about how we felt that we could use a good dose of gracious wisdom in our house (who couldn’t) and that we planned to keep that as her name.  There was also the factor that we planned to name our oldest daughter Sophia.  From the very beginning of my pregnancy with her until three days before she was born, her name was going to be Sophia.  At my baby shower, everything I received was for “Sophia”.  Could it just be a coincidence that God prepared us to parent a child named Sophia, fifteen years before He was planning to bring this child into our lives?

The day after we arrived in Serbia, we learned that Ana-Sophia was not her name.  At our first ministry appointment, everything we saw had “Sophie” or “Sophia” as her name and we were told that she only had this as her first name and a Serbian surname.  We tried to get used to it and we even talked about the fact that God had already paved a road into our hearts for a daughter named Sophia.  We all tried really hard, but we kept finding ourselves calling her Ana-Sophia.  After a week of spending time with her, we were given papers with her name on them that had it spelled S-o-f-i-j-a.  This is the Serbian spelling of Sophia.  Chad likes the spelling and I just keep imagining Americans butchering it and not having any clue what to do with that ‘j’.  I asked if we had any options when it came to naming her at the adoption ceremony.  The answer was, “NO.”  After the adoption ceremony, she was given a birth certificate with her first name and our last name on it.  So…we came home with our new daughter, Sofija.

After the miracles it took to get us home, we were hoping and praying for a fairly painless first few days as a family of six.  God showed us mercy.  Sofija seemed to know that this house is her home from the moment she walked in the front door.  Within 24 hours she was calling it “my house” and she had staked her claim in pretty much every single room. 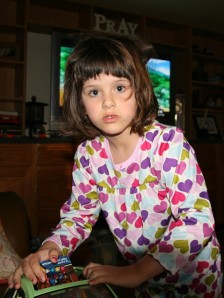 We were amazed at how she managed to stay awake until 9pm on our first night home.  That’s 3am Serbian time and she didn’t even seem phased by the time difference.  The rest of us kept waking up and trying to go back to sleep, but our little Serbian Superstar acted like she has lived every day of her life in America’s eastern time zone.  Thank you, God!

Around this house, we’re big waffle eaters.  Any child (or adult) who has slept over at our house in the last decade has heard Donkey’s line from Shrek before they ever get to sleep.  “And in the morning…We’re making waffles!”  On our daughter’s very first morning as an American, her Tata made Belgian waffles.  She kept pushing them away and telling us “necu, necu” (don’t want).  After watching the rest of us eat for a while, she took a bite off of Kira’s plate and then devoured her own and attempted to eat the syrup with a spoon.

Something that I’ve failed to write about is just how musically inclined ALL of our children are.  Chase picked up a trumpet last year for the first time and he’s now able to play just about anything he hears.  He’s more dedicated to practicing than I’ve ever been at practicing anything in my life!  This dedication brought him very close to a panic attack when I suggested that there was no room for his trumpet in our luggage.  We made room, and I’m sure that the people who lived in all of the apartments around us took great pleasure in his late night and early morning tunings.  At our first visit at the foster home, someone told us that Sofija loves trumpets.  It was just a random fact that someone threw out in the middle of a hundred other random facts that we were trying to absorb, while waiting for some great nugget of information that might help us connect with our child.  But…it was the fact that stopped our heads from spinning and put a huge smile on the oldest brat’s face.  In case you’re wondering, brat is the Serbian word for brother and the ‘r’ is rolled.  So, on day two, we came armed with our own personal trumpet player.  From that moment forward, Chase has been her favorite family member.  While the rest of us have been pinched, slapped, kicked, bitten, and generally abused, Chase just gets smiles and hugs.  Man, I wish my Mom hadn’t let me quit every time I started learning a new instrument!

I mention Sofija’s love for music because it has played a huge role in her transition into our family.  The same day that we learned she loved trumpets, we found a book with a cd of Serbian children’s songs with the lyrics in both English and Serbian.  It’s designed to help her learn English.  She loves it!  She sings ALL THE TIME.  The rhythm of her songs tends to match the rhythm of her rocking.  This tendency is contagious.  We’ve made up lots of songs that match her rocking rhythm and she sings them all with us.  In one of these songs we call her pretty Sofija.  She loves to sing the word ‘pretty’.  She rolls the ‘r’ and sings it in her deep, raspy, smokes a couple packs a day, voice.  It’s one of the most precious sounds I’ve ever heard.  On our first day home, she was standing in the kitchen, rocking and singing her pretty Sofija song, when the rest of us realized that she had changed the lyrics to “pretty Ana-Sofija”.  Then on Sunday, just before we entered God’s house and got to spend a little time quenching our spirits, Chad said “Tata volim Sofija” (Daddy loves Sofija).  She quickly stuck her pointer finger up in front of her nose and said, “Tata volim Ana Sofija”.  And yes, she emphasized the Ana.  On Monday, she corrected us several times throughout the day when we called her Sofija.  So there you have it.  Her name is Ana Sofija.  I printed out the packet from the local county court to readopt her, issue her a Virginia birth certificate, and legally change her name.  She had no name for the first six or seven months of her life.  We do not even know who named her.  What we do know, is that she was called to be our daughter.  We know that we were called to rescue her from a life without hope or a future.  We know that she is our child, but more importantly, we know that she is a child of God.  He called her by name.  She is gracious wisdom.  She may be trapped in a cage that is too small for her to spread her wings and show the pretty gracious wisdom that God made her with, but I believe with all that I am that God has put her here, in our family, in order to destroy the walls that cage is made of.

“Do not fear, for I have rescued you; I have called you by name (Ana Sofija), you are mine”

7 thoughts on “the name game”