A few weeks ago I was searching for a deal on flights to Serbia and the best fares all required at least one lengthy layover. One option was an eight-hour layover in London. I have a dear friend in England that has gotten married and become a father since the last time I saw him so I checked to see how much it would be to stay overnight. When I found that it was $400 cheaper, I sent him a text to see if they’d be in town, booked the flight, and began packing. My overnight stay with his precious family turned out to be a great decision. Besides falling in love with his sweet wife and the best-natured baby boy I’ve met, I realized exactly what I was traveling to Serbia for.

I had two hours of train (or “tube”) rides to get from Gatwick Airport to where they live in Essex and along my journey I quickly noticed that before each stop there was a recording warning those departing to “Mind the gap.” When I exited each train I turned and found signs on each car and tiles on the ground spelling out the same warning. I’ve done a little research on why the warning is given. The phrase was coined in 1968 to remind passengers to pay attention to the space between the train and the platform. Some of the platforms are curved and the train cars are straight. So, in some places the space between the platform and the train is quite wide and creates a hazard for passengers if they aren’t “minding the gap”.

After my quick visit with the Brits and a brief layover in Poland on the 100th anniversary of their freedom, I arrived in Serbia to be greeted by my brother Samuil. Samuil and I are cut from the same cloth. We are both gifted networkers, love Jesus, and we both attempt to squeeze every minute of purpose out of every day. So I knew from the moment I climbed in his car at Tesla Airport that the days that followed would be filled with adventure.

Twelve hours of sleeping off my jet lag led to me awaking on Monday morning ready to do whatever God had planned for me. As I prepared for the day I pulled the hoodie pictured above out of my luggage. I walked past it at Heathrow just before boarding my plane to Warsaw and impulsively went back to purchase it. As I lifted it from my luggage the words stuck in my head. They would replay in my mind throughout each day that I spent in Serbia. “Mind the gap, Kaci.”

On Tuesday my friend Pam and I spent the day with government officials, social workers, and several foster parents. The day began with an unexpected newspaper interview (If you paste the link into Google translate it will translate the entire article) in the same paper that has covered parts of our story in the past. We were there to discuss the way foster care and orphan care are done in the US and ways to better prepare orphans for independent living. The day was humbling and enlightening. The truth is that we fail in SO MANY ways to care for orphans in America and we aren’t doing any better than Serbia is when it comes to preparing the next generation for independent living. I quickly realized that everyone in the room had things to learn from one another. The day turned into more of a think tank on ways to “mind the gap”.

Tuesday night we had dinner at a transition house in Belgrade. Pam asked the youth living there if they could have dinner with anyone in the world, alive or dead, who would it be. One girl said that she would want to have dinner with the Aleksander Vucic, the Serbian President. She happened to be sitting right next to me and spoke English so I turned and asked her what she would ask him. Her response, “Does he care about the youth of Serbia and if he does what is he doing to keep us here?” This precious nineteen year old girl, that is stuck between a very hard childhood (her platform) and living out her potential is desperately looking for someone with power to “mind the gap”.

Wednesday we taught foster parents, social workers, and leaders of several NGOs on trauma informed care and fundraising. At the end of our teaching we had a Q&A time and once again it turned into a think tank on ways to “mind the gap”.

Wednesday night I had a drink with a friend that is a Colonel in the Serbian Army. On our walk back to where I was staying we briefly discussed his experiences with war. I quickly realized that little is done to care for veterans in a nation where military members have experienced more combat than this military wife can fathom. Noone is “minding the gap”.

On Thursday I climbed in the EUS (Samuil’s organization-Evangelical Student Organization) van and drove to Novi Sad for a conference on human trafficking that was organized by my friend Marco. The conference was amazing! SOO many people showed up to learn and lend their voices and I could not be prouder of what has been done in Serbia to “mind the gap” for victims of trafficking since my last visit in 2011.

Friday morning I overslept and awoke to my friend Mila at the door (with breakfast-because she’s a hero). She made me coffee while I threw my clothes and face on and after a much-too-short catch up on all that she has been doing to “mind the gap” by opening a crisis pregnancy center and helping women who’ve experienced abortion find healing; my friends Bojan, Rachel, and Marijana arrived to drive me to meet Sofija’s biological brothers. 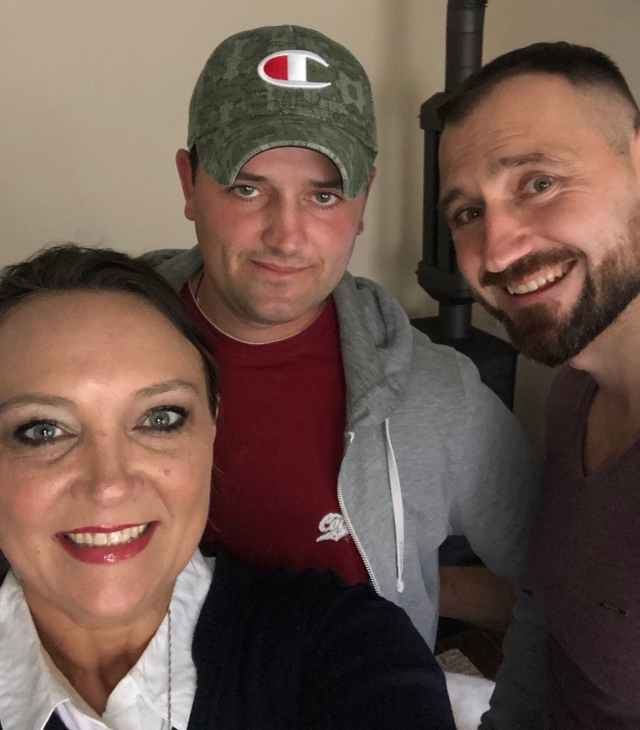 Y’all, my time with these men who share my daughter’s blood was priceless. They were kind, welcoming, and honest. They are good men (both in their thirties), and they want to know Sofija. Their Mother’s story is one for another day and there are two more siblings I have yet to meet, but sitting in their home and seeing my daughter’s eyes, and smile, and ears, and hands was one of the greatest gifts I’ve been given. I also met Sofija’s sister-in-law and niece (both incredibly beautiful). These people are Sofija’s family which makes them OUR family.

Friday afternoon was spent shopping with my friend Tatjana that started the transition homes that brought me back to Serbia and then attending Samuil’s birthday celebration. On Saturday I flew home.

I missed church on my first Sunday home because.. jet lag. And I missed this last Sunday because our family caught a nasty cold over Thanksgivin. While sniffling and fighting a fever I sat and watched a sermon via Facebook live from the International Christian Fellowship in Belgrade. It was their tenth anniversary and it only seemed appropriate that I watch the ten-year celebratory service of the community of believers that gave me all of the friends I was able to connect with on my trip. Jonathon Lamb was the guest speaker for the service. He is an author and minister from Oxford, UK.

In the middle of his message, Jonathon quoted 1 John 2:6 “Those who say they live in God should live their lives as Jesus did.” It is one of my favorite life verses. In fact, I believe that all of 1 John 2 is one of the most powerful passages in the Bible and I highly encourage you to click the link, read it, write it down, read it some more, and make it your daily challenge. Trust me! Trying to live it out WILL be a challenge. But if each of us who calls ourselves “Christian” would actually make it a daily challenge to live our lives as Jesus did, we would never have to question whether or not we’re “paying attention”, “applying ourselves”, “taking care of”, or “feeling concern for”; the “breaks or openings”, “empty spaces and interruptions in continuity”, or “wide divergence or disparities” of this world.

When we adopted Sofija in 2010 , our eyes were opened to many needs in Serbia. One of those needs was the lack of life skills children had as they transitioned from orphan care to independent living. Those who spend their life in an orphanage enter adulthood with very few independent living skills. And… There are A LOT of orphans entering adulthood without finding a family.

The need for transitional care weighed heavy on me, but after a few inquiries it was made clear that Serbia isn’t a fan of privatized care of their citizens being done by outsiders. Eight years have passed and Serbia is  now a member of the Hague Convention. Joining the Hague Convention greatly improved orphan care, legalized and legitimized the adoption process, and provided an extra layer of protection between orphans and traffickers.  Even so, for the last eight years, what happens to all of those who “age out” has continued to weigh heavy on me.

I had lunch in Orlando with several coordinators of Operation Christmas Child distributions throughout Serbia. I took some time getting to know everyone around the table and saved the lady to my immediate right for last. Her name is Tatjana (Tanya). When I asked her what she does she replied with, “Well, I have to tell you the back story before I tell you what I do.” I responded by bringing my hand to my chest and smiling as I said, “Oh, we’re going to be friends!”

Tanja then told me that she has four biological children and that she and her husband decided a few years ago to foster a child who was about to age out. They then learned just how many children were getting ready to age out and they desperately wanted to help more than one. Because there is a limit of five children in the home for foster families, they decided to open a transition house. From their desire to love big, HOP (pronounced “hope”) House was born. It stands for House of Opportunity.

Before Tanja had finished telling me the story, I knew I had to partner with her. I’ve learned SO MUCH about the odds against a child who ages out and has no transitional care. It’s U.G.L.Y. We’re talking about real, precious humans who are filled with nothing but potential that mostly just disappear. Their lives are lost to suicide, drugs, trafficking… Being accepted into one of the houses is literally the difference between life and death. The kids at the HOP Houses are going to school. They are working. They are learning to cook, and budget, and care for a home, and play instruments, and make crafts and candles that they sell at various venues in an attempt to support themselves. More importantly, they are learning what it means to be safe, live in a family setting, and to be loved unconditionally. They’re not just finding hope. They’re experiencing Jesus. 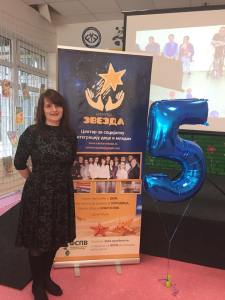 HOP Houses are in urgent need of support! The houses currently have enough funding to carry them through July and they will close in August without an influx of money. Below you can see the exact cost of keeping the houses operating and what their current needs are. If you would like to help, you can contact Tanja or myself and we’d be happy to tell you how to get money to them.

I hardly know a person who hasn’t been outraged by some aspect of the situation with families being separated at the US/Mexico border. I’ve seen countless people on social media ask how they can help. Here ya go… If you want to make a difference in the lives of children who’ve been orphaned or separated from their families, this is a great opportunity.